Piero P. Giorgi gained a BSc Hons in Biological Sciences (1965, University of Bologna, Italy), a PhD in Neurology (1974, University of Newcastle/Tyne, UK) and was elected a Fellow of the Australian Institute of Biology (1998). As a neuroscientist he has introduced scientific concepts and different research methods into peace studies, a discipline usually operating within humanities and social sciences. With other colleagues at the University of Queensland, Piero introduced in 1991 the first program in Australia for a degree in Peace and Conflict Studies, which is still offered in 2017. Piero retired in 2005 to promote peace studies in Italy, as a member of the European Centre of Gargnano, Brescia, (www.centroeuropeo.info).

# Giorgi P. P. (2001) The origins of violence by cultural evolution, 2nd edition. Minerva E&S, Brisbane. [Out of print, it can be free download at the web site: www.pierogiorgi.org].

# Giorgi, P. P. (2009) “Nonkilling biology” in Joam Evans Pim (ed) Toward a nonkilling paradigm, pp. 95-124. Centre for Global Nonkilling, University of Hawai’i at Manoa (Honolulu). [This book can be downloaded for free at the web site: www.nonkilling.org/center/publications-media/books-cgnk-publications].

# Giorgi, P.P. (2010) “Not killing other people – The origins and only future for Homo sapiens” in Joam Evans Pim (ed) Nonkilling societies, pp. 83-100. Centre for Global Nonkilling, University of Hawai’i at Manoa (Honolulu). [This book can be downloaded for free at the web site: www.nonkilling.org/center/publications-media/books-cgnk-publications].

# Rosco, C. & Giorgi, P.P. (2016) L’invenzione della violenza (The invention of violence) Interview published by the main Italian daily Corriere della Sera, edition of Brescia 29 December 2016, “Culture”, p. 10. Essential conclusion: “Violence is a recent cultural invention, therefore it can be reversed. The alternative is a close, inevitable extinction of our species”. To read this text, see here below.

If you encounter problems in accessing the text of the above publications, contact the author by email pieropgiorgi@gmail.com 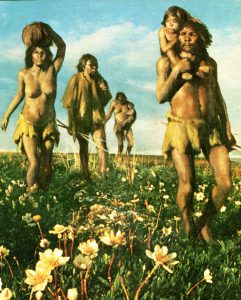 Article published on December 29, 2016 by the main Italian national daily newspaper Corriere della Sera, edition of Brescia, page 10 (Culture), with the title “Anthropology – The invention of violence”, and subtitle “It is a recent cultural change, therefore it can be modified”. An interview by the journalist Carla Rosco to Prof. Piero P. Giorgi. This English translation is by PPG. Illustration: a band of Palaeolithic Homo sapiens moving camp.

A few years ago Piero P. Giorgi established one of his retirement domiciles on the shores of Lake Garda in Gargnano (Brescia, Northern Italy) at the European Centre – Saint Thomas Convent. He has been teaching and doing research on biomedical sciences and peace studies for about 40 years in several universities in Europe and Australia. He has distinguished himself with an intensive activity as a scholar and a passion in promoting nonviolence. He is still pursuing this commitment by keeping contact with colleagues in several parts of the world. Prof. Giorgi tells us that there is mportant news about our knowledge of human beings: “For centuries philosophers have discussed the definition of human nature without reaching clear results. Recently anthropologists have realised that it was them, the investigators of human beings, that hold the information necessary to do so and some of them have shown the courage to publish innovative conclusions.”

How is it that the discipline of Anthropology has not express itself earlier on this subject?

As a relatively young discipline, it has initially (XIX century) served the interests of colonial powers who wanted to understand the characteristics of the ethnic groups they were going to oppress. Their diversities, compared to Europeans as the “normality”, were emphasised. Studying, instead, the unifying characters of human beings would have been (it still is) politically incorrect. Moreover, one was impeded by the idea (still prevalent) that our knowledge of human beings, “history”, would begin only with the first written documents produced ca. 5,000 BC. Unfortunately, at that time various forms of violence and war also started, hence the politically handy belief that human beings have always been violent and thus are congenitally violent, was embraced.

Could you briefly explain the scientific evidence that supports the new ideas held by some renowned anthropologists?

The study of rock art found in all five continents and the interpretation of these millions of images has extended human history by at least 50,000 years, meaning the history of Homo sapiens. Palaeo-archaeology has refined techniques and interpretations concerning the remains of human settlements of the Upper Palaeolithic, the long period preceding the invention of agriculture. The objective (that is, scientific) study of the few surviving contemporary cultures of nomadic hunter-gatherers has enabled us to formulate hypothesis about the social organisation and behaviour of Palaeolithic human beings. These nomadic hunter-gatherers, have conquered five continents thanks to their bio-cultural (not just biological) evolution and their essential capacities of empathy, solidarity, cooperation, nonviolence, and spirituality (not religion).

From around 10,000 years ago these true human beings invented the production of food (agriculture and animal breeding) independently in three distant regions of the Earth (by itself a good idea). But the consequences have been disastrous in all three cases: in a few thousand years excessively large human settlements appeared, with social stratification, competition, power systems, structural violence, then direct violence, then war. Historians called it “civilization”. We are still living this human tragedy, which justifies the question as to whether we can still be called human beings. The literature associated with this new historical vision, which has nothing to do with J. J. Rousseau, was initiated in 1996 (Leslie Sponsel), has continued this century (see P. P. Giorgi 2001, The origins of violence by cultural evolution, Minerva E&S, Brisbane. It can be downloaded at www.pierogiorgi.org) and has continued with Douglas P. Fry and several others (2006-2015). The definition of human nature briefly outlined here has been presented in 2015 at a conference organised in Leiden (Holland) with the participation of the authors mentioned here.

Can this new vision of the nonviolent potentialities of human beings can offer some hope for the future?

The new scientific hypothesis about human nature allows us to think of violence as a recent change (ca. 7,000 years ago) and a purely cultural one (a human invention that can be reversed), while the genetic predispositions (not behavioural definitions) for nonviolence have remained with us as they were with Palaeolithic humans, hence the current “social malaise” (disharmony between society and human nature). This conclusion is also supported by our knowledge of population genetics (the cessation of our biological evolution before agriculture) and by the postnatal definition of human social behaviour (culture) discovered by neurobiology (Giorgi, 2001), which explains the existence of ca. 6,000 cultures in the world, most of them violent and suffering the same malaise.

This situation would allow, in theory, the wise choice of transforming our enormous violent communities into much smaller nonviolent units, while maintaining today technologies, but only those that are really useful. This transformation may avoid a rapid extinction of our species, which has developed an unsustainable level of violence man-against-man and man-against-environment. Two obstacles are in the way: the rigid mentality of adults, who are very reluctant to change their lifestyle, and the powerful interests of the industry associated with violence (weapons and entertainment). We can only hope for a radical change in social models offered locally by illuminated citizens to their offspring between the ages of 0 and 10 years, in parallel with courageous choices hopefully made by local administrators. Nonviolence cannot be, in my opinion, a global project; it will start in small towns and will move by cultural transmission to nearby localities, just as violence did a few thousands of years ago.

# Giorgi, P. P. (2001) The origins of violence by cultural evolution. Minerva E & S, Brisbane. Out of print. It can be downloaded free at www.pierogiorgi.org

# Giorgi, P. P. (2011) “Nonkilling other people – The origin and only future of Homo sapiens” In Joàm Evens Pim (ed) Nonkilling societies, pp. 83-98. Center for Global Nonkilling, University of Hawaii, Honolulu. It can also be downloaded free at www.nonkilling.org

If you encounter problems in accessing the text of the above publications, contact the author by email pieropgiorgi@gmail.com